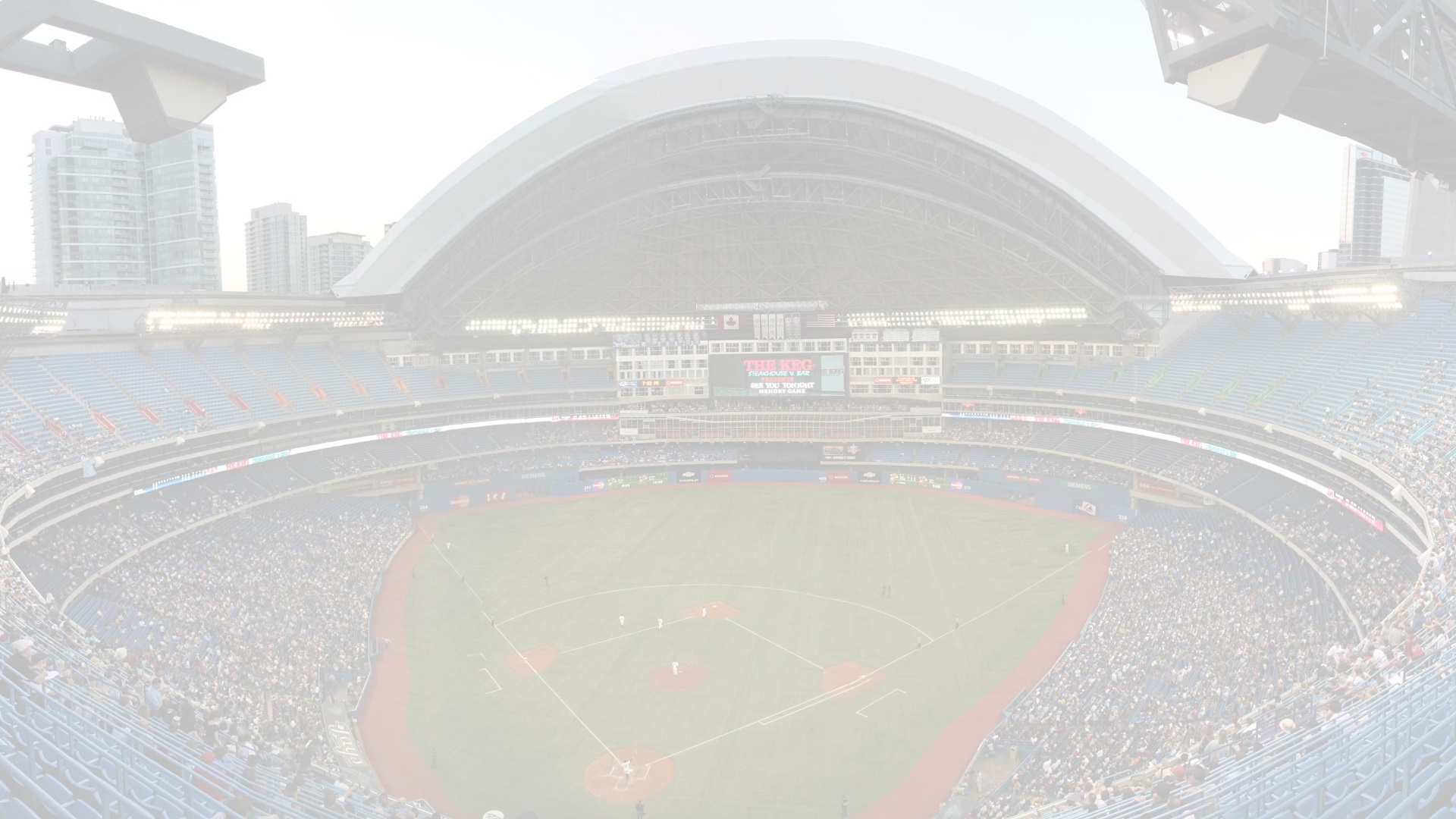 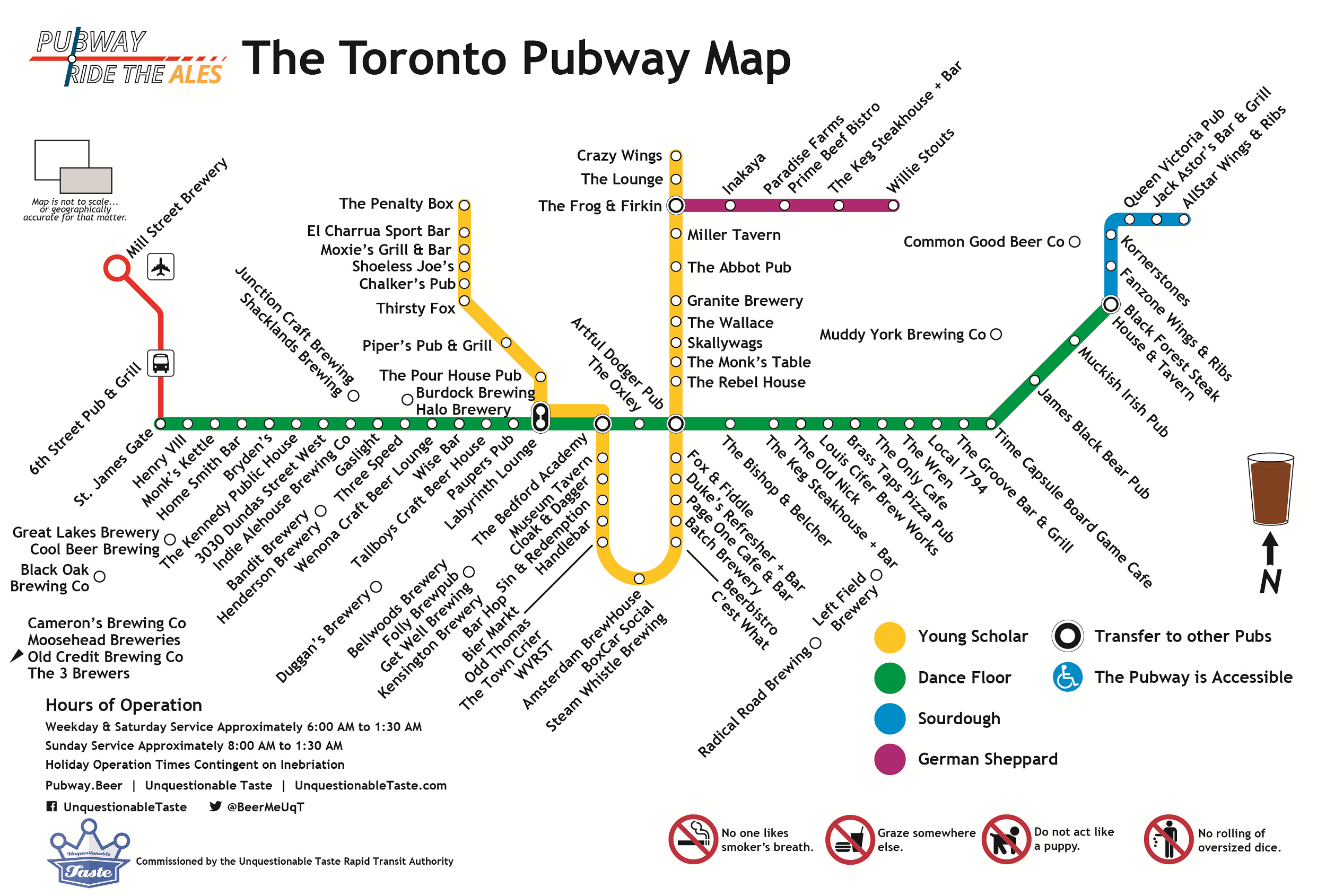 The five Great Lakes contain more than a fifth of all the world‘s above ground fresh water. Starting in the west with Lake Superior, the world’s second largest lake, the water flows east into Lake Michigan (the world’s largest lake located entirely within one country), then onto the Huron, Erie, and eventually Ontario after flowing over Niagara Falls. Lake Ontario is the last and most eastern of the Great Lakes before the water flows northeast up the St. Lawrence and finally ends up in the Atlantic Ocean. The lake is also the smallest and second least voluminous, ahead of Lake Erie (as Ontario is much deeper than Erie), and its surface is at the lowest elevation of the lakes. And like most of the other lakes and the St. Lawrence, Lake Ontario lies between the United States to the south and Canada to the north. On the southern shore lies the Upstate New York city of Rochester (Buffalo is just south of the Niagara River on the eastern end of Lake Erie, which flows north over Niagara Falls to Lake Ontario), while the northern shore is home to a region in southern Ontario known as the Golden Horseshoe. The region, shaped like a horseshoe around the western end of the lake is the most densely populated and commercially developed region in Canada, being home to more than a quarter of the country’s residents. Before the first Europeans arrived on the northwestern shores of Lake Ontario, the area was inhabited by Wyandot also known as the Huron, who were later displaced by Iroquois. The languages of both native American nations contributed to the name of what would be known as, Toronto, with “Tkaronto” Iroquois for “place where trees stand in the water” and “Toronto” meaning “plenty” in the French lexicon of the Wyandot. Toronto was first settled as a trading fort known as Fort Rouille in 1750, later abandoned in the wake of the Seven Years War. The area was then reestablished as York in 1793, which incorporated as Toronto on March 6th, 1834 with a population of less than ten thousand. The city, which has experienced tremendous growth in the last century sits on relatively flat land and has geographically expanded to include neighboring towns, further growing the city’s scope and population. The city today occupies 243 square miles and 29 miles of Lake Ontario shoreline. 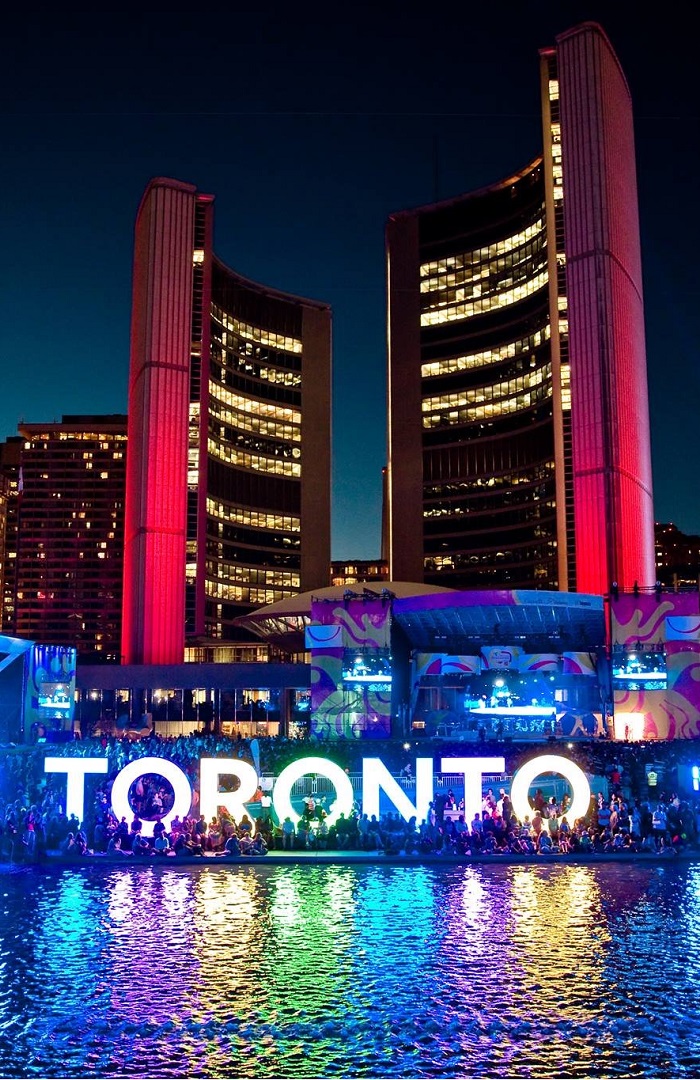 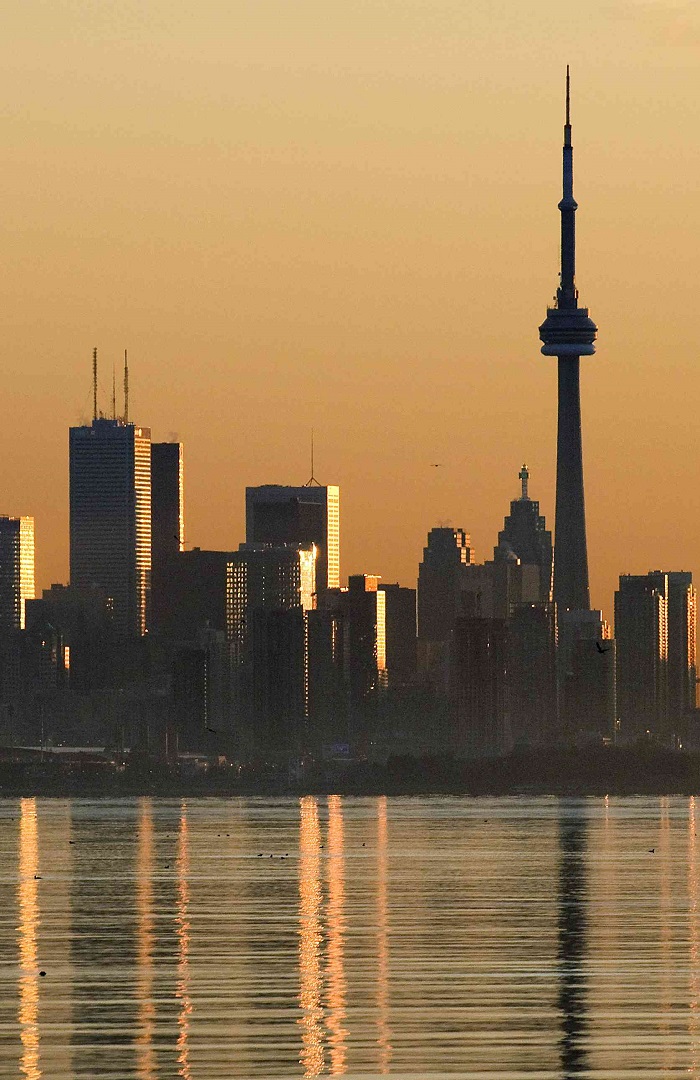 Toronto was at two brief points in time, the capital of the Province of Canada, back when Canada was still a British colony. As part of the British Empire, Toronto, formerly known as York, was captured and taken over by American Revolutionary forces in the Battle of York during the War of 1812. While the American victory didn’t produce any immediate strategic results, the victory ultimately ended up capturing weaponry destined for British forces on Lake Erie. This contributed to a decisive American victory in the Battle of Lake Erie, giving the Americans control of the lake and recovering Detroit. Toronto traded the role as Canada’s Capital with Quebec twice in the 1850s until Ottawa became the permanent capital thereafter. After multiple legislative milestones, Canada finally gained full independence with the Constitution Act of 1982. During the mid 19th century, several railroad companies built lines heading to Toronto from the rest of the Great Lakes. These links bolstered the regional economy and brought immigrants and businesses from many cities across North America, as it had happened in Chicago. The city was the largest alcohol distillation center in the Americas and the railways expanded many other important industries along Toronto’s waterfront. Like Chicago, Toronto also suffered a large scale fire in 1904 that resulted in stricter building and fire safety codes. The 20th century brought racial diversity, suburbanization, urban development, and political uncertainty. The Toronto Stock Exchange overtook Montreal’s in 1934 to become the largest in the nation. The population of Toronto increased from 1 to 2 million between 1951 to 1971, following an easing of racially based immigration policies. Over the course of the 1900s, Toronto went through various stages of amalgamation, merging with neighboring towns and cities to become the expansive city it is today. 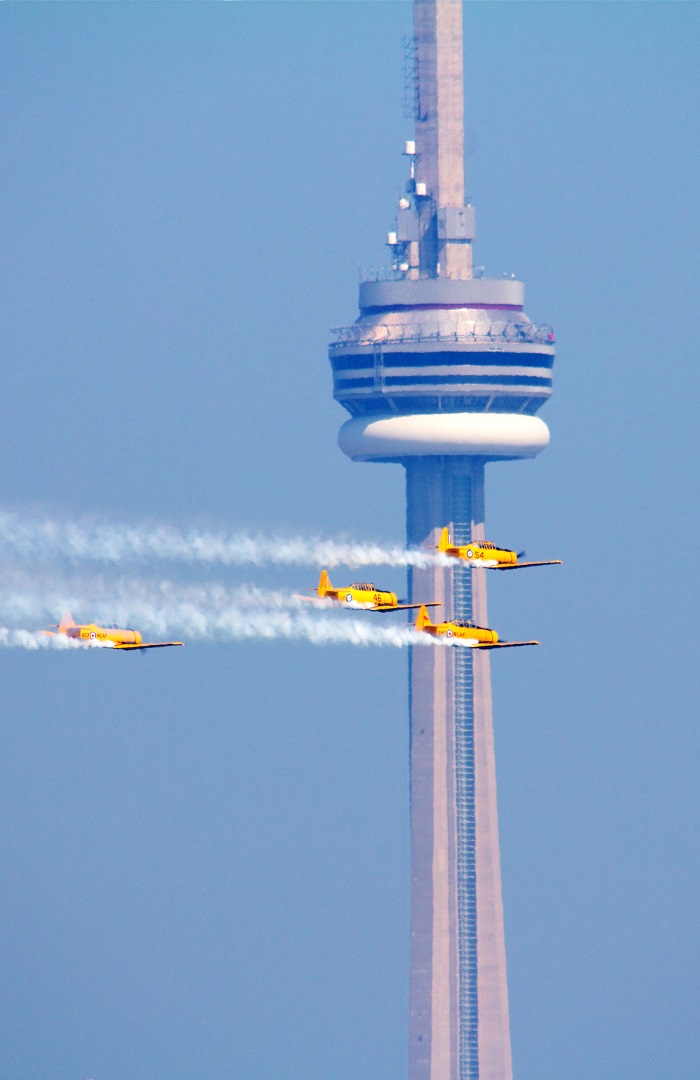 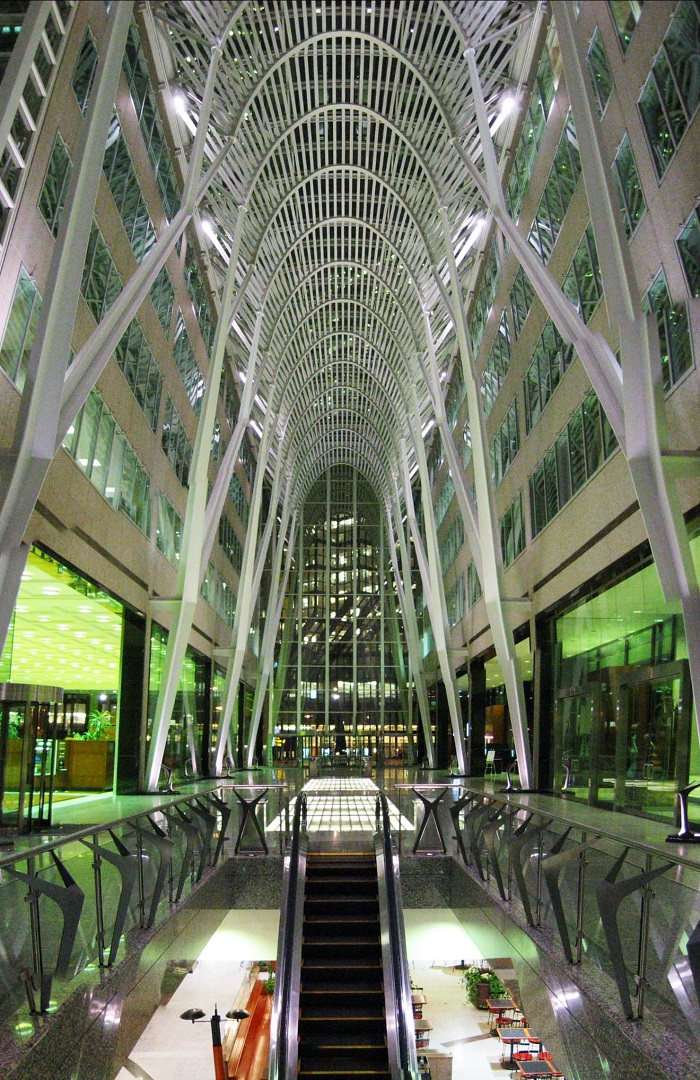 Toronto is regarded as one of the world‘s leading global cities, being a highly diversified international nexus of finance, culture, arts, sports, and education. Nearly half of the city’s residents belong to a visible minority group as defined by the Canadian government, with 160 languages and 200 distinct ethnic origins represented. The city is home to the nation’s main television networks and studios, as well as many of Canada’s most popular festivals, museums, sporting events, and tourist attractions, including the CN Tower. The tower, built by the Canadian National Railway Company in 1976 is a 1,815 feet tall freestanding communications tower with a revolving restaurant and two observation decks, one of which contains a glass section of its floor, allowing visitors to look down at the streets below. There’s also a relatively new feature called EdgeWalk, in which tethered guests can walk hands free around the roof above the restaurant. The CN Tower was the tallest freestanding man-made structure in the world from the time of its completion until 2007, when it was surpassed by the ongoing construction of the Burj Khalifa in Dubai. The Tower is the most recognizable landmark in the city, which is known for its recent skyscraper boom. Toronto is home to Canada’s five largest banks, the Toronto Stock Exchange (7th largest in the world by market cap), and the head offices of several Fortune 500 companies. Toronto is also known for its prominent sports culture, with teams in the NHL (Maple Leafs), MLB (Blue Jays), NBA (Raptors), MLS (Toronto FC), and CFL (Argonauts). The Maple Leafs, being an Original Six team founded in 1917 as the Toronto Arenas, have won 13 Stanley Cup Championships, second in the league only to the Montreal Canadiens‘ 24. The Blue Jays won two World Series titles in the early 1990s. The Hockey Hall of Fame, home to the Stanley Cup and the NHL’s other famous awards and trophies, is located in Brookfield Place, an office complex in downtown Toronto. And finally, the NFL’s Buffalo Bills played a mini series of home games at the Rogers Centre (home to the Blue Jays) between 2008 and 2013. 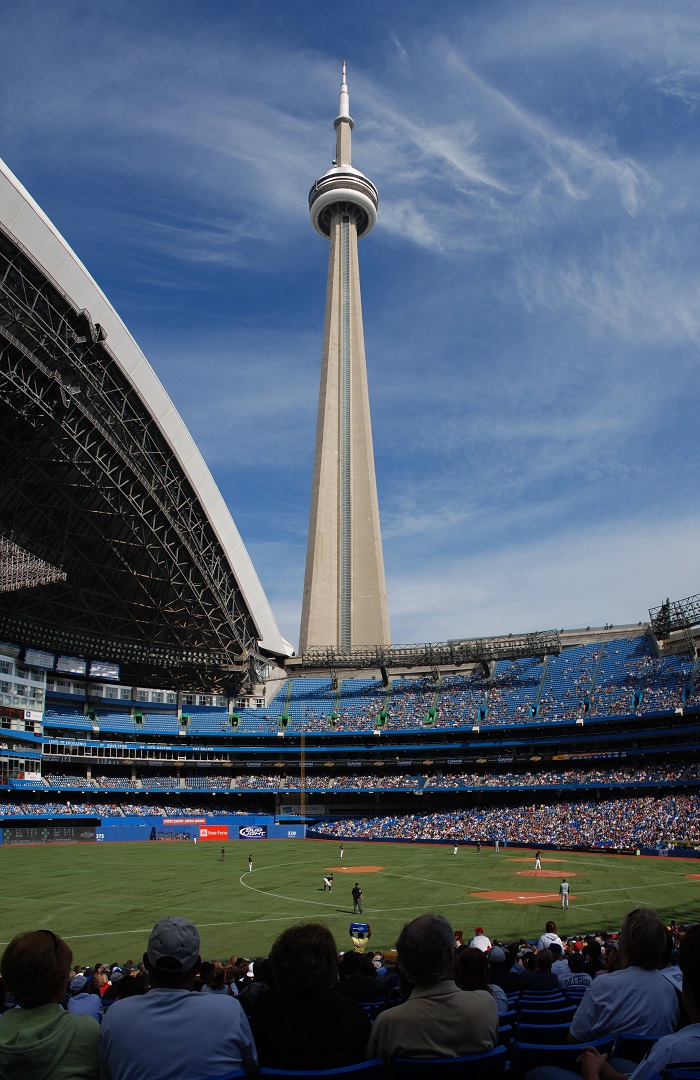 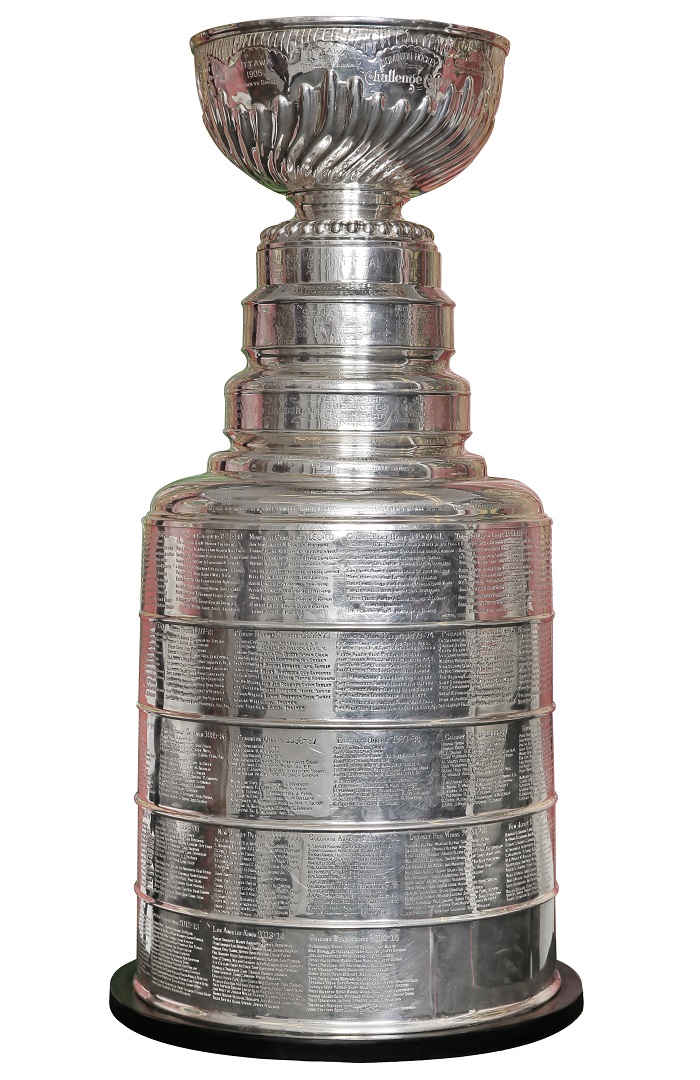 Toronto’s contributions to the arts and theater do not go unnoticed either. The Toronto International Film Festival, the National Ballet of Canada, the Canadian Opera Company, Toronto’s Symphony Orchestra, numerous performance theaters, Canada’s Walk of Fame, and the world’s first permanent IMAX movie theater all call the Big T.O. home. The term “Hollywood North” is used to describe the film industry in Canada, specifically Toronto and Vancouver. Toronto is the second largest exporter of TV programming in North America, and home to many of the largest studios and production companies in the world. Both Toronto and Vancouver benefit from provincial and federal tax incentives to promote the domestic and international, especially American film industries. The city is also host to several famous annual events, including the Canadian National Exposition, the oldest annual fair in the world which has historically showcased technological and innovative achievements. Other notable annual events include Caribana, North America’s largest street festival celebrating Caribbean culture, Pride Week, the world’s second largest LGBTQ festival, and the Toronto Santa Claus Parade, one of the largest and oldest parades in North America, having been first held in 1905. 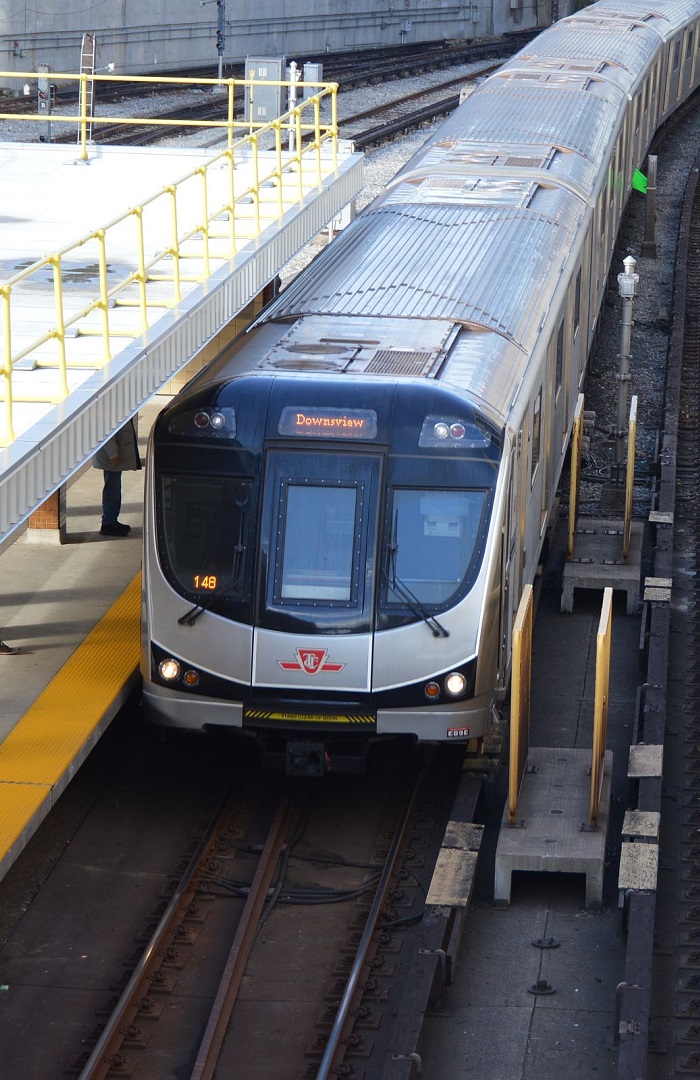 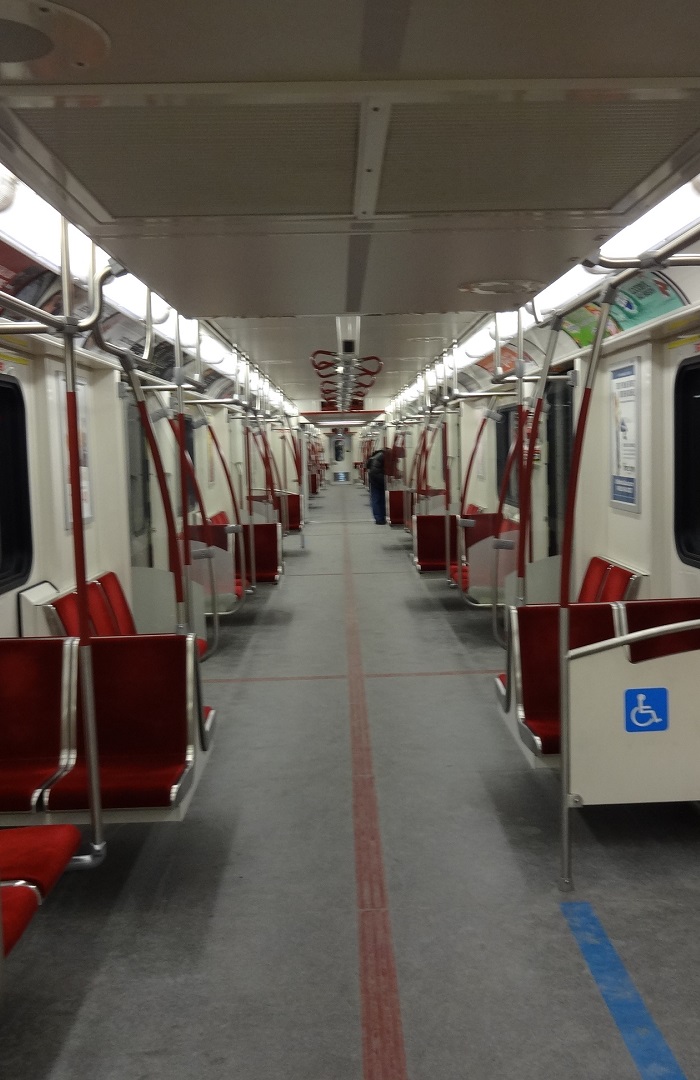 The City of Toronto has a GMP of more than $250 Billion (USD) and represents 20% of the entire Canadian GDP. And while the Greater Toronto area produces more than half of Canada’s manufactured goods, its economy continues to grow at an impressive pace. The region is served by Go Transit, the metro area’s commuter rail service, and by the Toronto Transit Commission otherwise known as the TTC. The agency operates bus, street car, subway, and paratransit services, with about 750 miles of total revenue routes and more than three thousand revenue vehicles in service. The TTC is the third most heavily used mass transit system in North America, after New York City’s MTA, and Mexico City’s Metro. The four rapid transit subway lines total 47.8 miles (76.9 km) and are built on the same gauge as the city’s street car system, known as Toronto Gauge (4 feet, 10 and 7/8 inches – 1,495 mm). There are 75 rapid transit stations and 685 street car stations across the system. Much like the other remaining streetcar systems across North America, Toronto’s network dates back from the 1800s, however, unlike most of these systems, the Toronto Streetcar remains an important, heavily used part of the overall transportation infrastructure, connecting many of the suburbs to downtown. The subway opened on March 30th, 1954 as the Yogne Subway, currently known as the Yonge-University Line 1 (Yellow). There is a fifth line, a 12 mile light rail line with 25 stations being constructed (Eglinton Line 5), and further plans for expansion include three more light rail lines (6-8) totaling 25 miles and 74 stations. The latest trains, known as the “Toronto Rocket” are the fifth generation of rolling stock in the system. Constructed by Bombardier Transportation in Thunder Bay, Ontario, the stainless steel trains (80 currently on order) contain up to six cars each and can move about 1,450 passengers at a max speed of 47 mph (design top speed of 55 mph). The trains are the first trains equipped with fully-open gangways, allowing passengers to easily walk the entire length of the train. They are only used on Lines 1 and 4 and are compatible with automated communications based-train control (being installed on these two lines) which allows for more accurate, more efficient, and safer train traffic management. The name was chosen through a contest open to the public, and the trains themselves are funded jointly by the City of Toronto, the Province of Ontario, and the Government of Canada.